* In case of any delay in receiving the OTP, you may verify it later. Please proceed without verification.

Enter your City name or Pincode

Weekend trips once in a while refreshes your body and mind and gives that much needed break from your daily life which is required for everyone. You can spend quality time with family and friends and unwind and have lots of fun. Here are a few weekend gateways from Pakur which can be planned to visit with family and friends.

The city of Dhanbad is located in the state of Jharkhand. It is a popular tourist spot and not far from Pakur. There are several tourists’ spot that can be visited when here. Some important tourists spot in an around Dhandbad have been disclosed below for easy reference when thinking of visiting this town on holidays or during weekends. 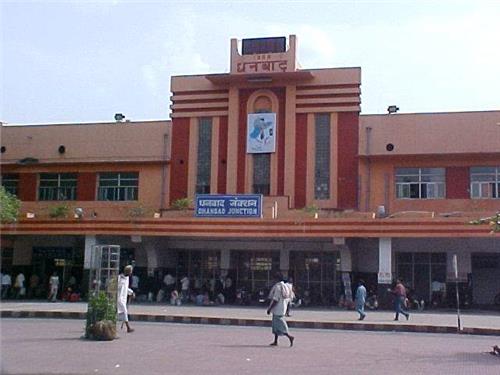 Dhanbad Junction
Maithan Dam is a preferred destination from Pakur because of its picturesque surroundings. Located 48 Km from Dhanbad, the dam is 15712 ft long and 165 ft high. Its main purpose is to generate about 60,000 KW of electricity and also to control flood. Made over Barakar River, it is a famous picnic spot for people of all age group. Apart from Maithan Dam, Panchet dam is also one such place which can be visited for some great time.Panchet hill forms the background of this dam giving it a very beautiful view. Made over Damodar River, this place is also preferred by tourists especially at the end of monsoon and also during Christmas and New Year’s time. Topchanchi is another such place which can be of interests to those who are interested in visiting wild life sanctuary. The sanctuary has large variety of animals. During sunset it is treat to see many animals coming out of their hiding place. There is also an artificial lake which has been build to supply water to the city Dhanbad and surrounding areas. The lake is very well maintained and can be visited to be amidst nature and fresh environment.


How to Reach Dhanbad near Pakur ?

Dhanbad is located at a distance of 209 Km from Pakur and takes about 4 hours 50 minutes to reach. One can either travel by bus or can avail the train also to reach Dhanbad.

Plan you Trip to Murshidabad Near Pakur

Murshidabad located in West Bengal is an important tourist spot and is located at close proximity to the city of Pakur. The city has great historical significance and is very rich in culture. This can be proved by the fact that there are several monuments and buildings which are several years old. Those interested in Indian history would find Murshidabad a great place to explore. There are numerous tourists’ attractions to keep you engaged all day long along with some great place to eat too. 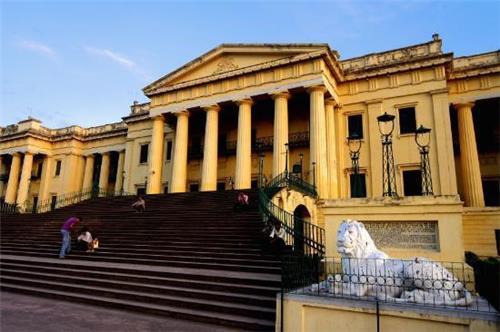 Hazarduari Palace
The chief attraction of the city is Hazarduari palace meaning a palace with 1000 doors. It was mainly build to hold meetings and for several other official purpose. It was also considered as the residence of the British officers who had high ranks. It has now been converted into a museum where exquisite collection of paintings, armory, portraits of Nawabs, several splendid work of ivory and various other valuables are on display for teh public to see. The vintage cars which were once used by the Nawabs are also on the display.Once here you would be mesmerized with the beauty of the items that are on display. Keep few hours of the day solely for the museum if you want to get immersed in Indian history.

Imambara is also another famous tourist attraction which was built by son of Humayun Jah in 1847 AD. The Imambara is not only the largest in West Bengal but also the entire India. Wasef Manzil, Katgola Palace, Nasipur Palace are palaces located in Murshidabad each with a separate story and a great visual treat too. The high minarets, huge dome, gorgeous buildings, intricate designs all around are going to leave you mesmerized. A huge canon 17.5 ft long and weighing about 16.880 lb can be seen in Murshidabad. Known by the name Jahan Kosha Canon, it was said to be built during 17th century by a craftsman from Dakha. Beautiful mosque Kadam Sarif can also be visited when here. Footi mosque and Katra Mosque are also famous mosques which must not be missed either. Many Muslim pilgrims can be seen visiting these mosques all year round. Tombs of several eminent personalities can be found in Jafarganj Cemetery and Khosh Bagh located in Murshidabad.


How to Reach Murshidabad from Pakur ?

A visit to Murshidabad is going to be a great experience with so many historical monuments and each having a separate story to tell. One must visit this city on weekend or holidays from Pakur which is located at a distance of 99 Km taking just a little over 2 hours to reach. The city is well connected via roads and railways hence easily accessible.

Malda city is often called as the gateway of North Bengal. The city which was the erstwhile capital of Gour Banga is a famous tourist spots and also of great interests to people of archeological interests. Among the several places to visit in the historic city the ones which are prominent are Gour, Adina, Pandua and Ramkeli. Ramkeli is famous as it was the place where the famous religious reformer Sri Chaitanya had stayed for few days before going to Brindaban. A conglomeration of two kadamba and two tamal trees can still be seen here. It is under these trees that the famous saint meditated. Eight kundas can be seen flanking the temple. It is visited by pilgrims from all over the country. 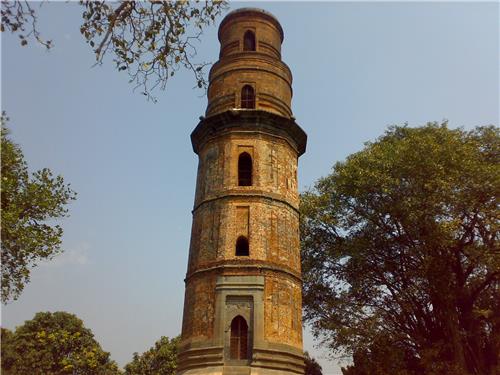 Firoz Minar in Malda
Gour is another famous city which has lot of places of historical as well as religious significance. Baroduari / Boro Sona Mosque, Chamkati Masjid, Chika Mosque, Kadam Rasul Mosque, Lattan Mosque are famous places of pilgrims for Muslims as well as people from other religion too. The structures that have been built are very unique and dates back to many years. The visitors will have a great time marveling at the architectures that can be seen here. Other historical monument that can be visited in Gour are Dakhil Darwaja, Firoz Minar , Luko Churi Gate, Kotwali Darwaja and Gumti Darwaza. The history associated with the structures is amazing.

The deer park situated in Adina is a must visit and a delight to watch both for the kids and adult alike. Turkey Bath Room, Pandab Dallan Minar, Atbart Dighi, Adina Mosque also can be visited when on a visit to this small town in Malda. Pandua is famous for Kutubshahi Masjid and Eklakhi Mausoleum which is an elegant monument and falls amongst the very first square brick tombs in West Bengal and is an interesting place to visit.


How to Reach Malda from Pakur ?

With national highway 34 passing Malda, it can easily be reached from anywhere in the country. It also has a major railway station from where one can get trains to any part of the country. It is situated at a distance of 66 km from the city of Pakur and can be reached within 2 hours.

The weekend destinations are easily accessible and not very far from Pakur. Hence on holidays or during weekends one can plan for a short trip to such amazing places and come back with a fresh mind.